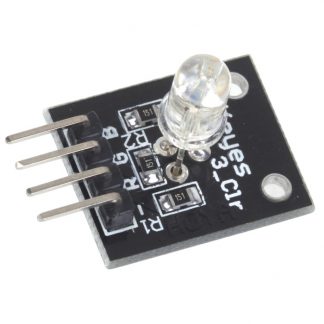 The LED is a common cathode type which means all 3 of the LEDs have their cathodes tied together.  The cathode is connected to ground and the red, green and blue LED pins should be connected to digital or PWM output pins.

The module has built-in 150 ohm series resistors to limit currents to a safe level, so no additional current limiting resistors are required.

The LED housing is clear, so the LED output is quite bright when viewed straight on unless PWM is used to lower the brightness.

There is a 4-pin header on the assembly for making connections.

LEDs tend to be fun to play with in general and RGB LEDs are the funnest of all.  With regular LEDs, you can turn them on and off, blink them or pulse them rapidly to change the perceived brightness.  With RGB LEDs, you can also add playing with color blending which allows you to create pretty much any colors of the rainbow.

The minimal way to drive the LED is by using logic levels to drive the Red/Green/Blue LEDs either individually or several together.  Using it this way, you can get 7 possible colors consisting of Red, Green, Blue, Yellow (red and green both on), Purple (red and blue both on), Cyan (blue and green both on) or White (all 3 on).  This may be useful for a basic indicator where you want to be able to show several different states using different colors.

More commonly, RGB LEDs are driven  using the PWM outputs of a uC.  This allows the brightness of each of the Red/Green/Blue LEDs to be adjusted by rapidly pulsing the output and therefore it is possible to color mix to get virtually any color you want from the LED.

The example program below uses PWM to show off some of the capability of the RGB LED.  First it ramps the brightness of each of the Red, Green and Blue LEDs.  Then it arbitrarily mixes the colors of the three LEDs together.